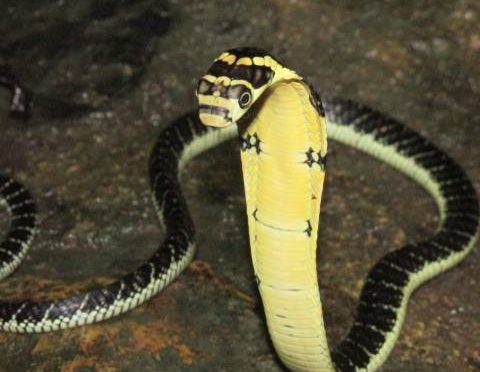 I saw this question on Quora, and I figured I’d weigh in and present a case for one of Thailand’s snakes as being the snake that kills you the fastest with a good bite.

The king cobra (Species: Ophiophagus hannah) can kill you the fastest of any snake — in under 10 minutes.

A king cobra is capable of killing people at least as fast as any other highly venomous snake, and possibly faster than any other snake. The reason is the large volume of neurotoxic venom which stops nerves in the body from firing.

There are many types of venom2 that act in different ways on the human body. The king cobra has venom which is primarily neurotoxic, acting on the nerves of the body to shut down the nerve processes at the synapse level. What this means is, the venom prevents nerves from properly firing. The nervous system which runs the body is shut down as the king cobra venom comes in contact with nerves around the body.

With king cobra envenomation, the muscles of the body stop working. The person becomes gradually paralyzed. Paralyzation isn’t all that bad if it just stops with body muscle. What happens with a king cobra bite is that there can be massive amounts of venom injected and it overwhelms the body’s nerves causing the diaphragm muscle — the one that is responsible for every breath you take — to slow down and stop. The venom can also stop the heart from working, causing a massive heart attack.

If you handle king cobras or expect to be close to them for any reason, please have a read of this protocol for king cobra bites here. It may save your life, or the life of someone you know.

Note — if you have ever heard of someone dying within 10 minutes as a result of a snakebite, whether a king cobra, or other snake like mamba, monocled cobra, krait, sea krait, taipan, brown snake, red-bellied black snake, or other – please let me know! I’d love to add information to this article.