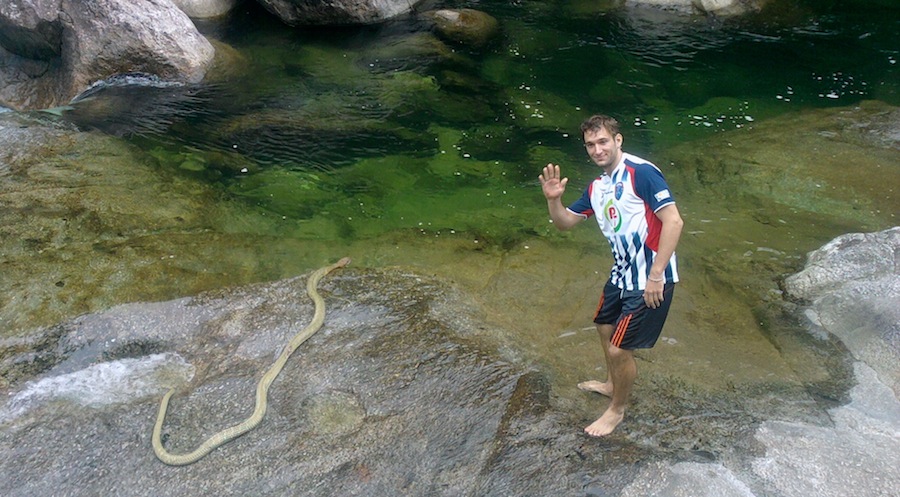 Robert Abrams sent me some photos of a snake he said washed over Menora waterfall he was relaxing at, the location is about 40 km outside of Ampur Muang, Phattalung province, southern Thailand. It was none other than the ultimate venomous snake, the king cobra.

“It was raining very heavy that day. Some friends and I went swimming at a waterfall outside the town where we teach. All a sudden it was swept down into the pool where we were sitting. It was pretty stunned, I think it was in shock because the water was abnormally cold. It also had a break in the scales along its side. It was still alive at the time. It almost managed to make it out of the water, a friend and I tried to get a stick but by the time we found one it had been swept further downstream. It may well have survived, but I doubt it. I think enough time in that cold water and the beating it took going over waterfalls would eventually finish it off.”

Amazing! Some people never get to see a king cobra in the wild – and this one almost dropped in Robert’s lap.

I’m glad he didn’t reach it with a stick like he was trying to. Originally he thought it was a rat snake, which is harmless.

It looks to me like the snake was probably run over by a motorbike or other vehicle and went back into the wilderness to try to mend itself. It was likely ready to die though. That looks like a wicked injury.