A couple of months back I received an email from a concerned father whose son was bitten by a red-necked keelback (Rhabdophis subminiatus) he had found in their neighbor’s garden.

“My son is suffering from nonclotting, severe swelling, and paralysis and is now in ICU, where his vital and neuro signs are ok, but blood not good.”

These snakes have, in the past, not been identified as a dangerous snake. Many people have them as pets, and free-handle them with bare hands. Sometimes these snakes bite, but once they are handled a bit they usually calm down and rarely bite. There have been some cases in the literature where bites have resulted in hospitalization, and there has been a push to identify these snakes as what they are – venomous, and dangerous.

Colubrids, rear-fanged snakes, are nearly all venomous. Venom is a modified saliva that helps the snake kill and breakdown the body of their chosen food.

I was excited to have a response from the father of this boy that spent 2 weeks in a Thailand hospital after suffering 2 bites from this snake.

Here’s what I learned after some questions by email…

1. Can you tell anything about how the bite occurred? Was the keelback snake typically calm – and then, out of the ordinary behavior – it bit your son?

Calm, he was showing off to his friends that he can handle snakes, this red-necked keelback was a wild one, not a pet. He has a constrictor, a corn snake and a python as pets, all fairly placid, but the keelback he had no understanding of.

2. Approximately how long did the snake bite down on your son’s hand? Was it less than 1 second? 1-3 seconds? 3-5? 10? 60 or more? This is the most important question because in the past we haven’t seen enough venom transferred from quick bites, or even repetitive quick bites…

3. Did the snake bite more than once that day?

Bit him twice within a few minutes.

4. Did the snake routinely bite your son – often?

5. Can you tell me approximately how long was the snake? Do you have any photos of it? Can you please send if you do?

No photo’s I’m afraid, he didn’t mention how long it was, but he will be back from school at the weekend, and I’ll fish more info out of him.

6. Did you get the snake in Thailand? There in Phuket, or where?

So, here again – the red-necked keelback snake bit down for an extended period of time – 30+ seconds and had time to squeeze a lot of venom into the boy’s hand. Then bit again.

There is no manufactured antivenin for the Rhabdophis subminiatus as it is here in Thailand. In Japan, there is a small amount of antivenin produced to handle bites from their local species. To my knowledge, there has been nobody treated with this antivenin outside of Japan, and I’m sure they would not be all that interested to give up some of their small supply to export to another country.

More information on venom toxicity and treatment after a bite by this snake: R. subminiatus.

Venom consists of mainly procoagulants, which can cause renal failure; plus mild neurotoxic factors. Envenomation does not always occur. The bite may be almost painless, with minimal local swelling. Symptoms of envenomation may include local numbness, headache, nausea, & vomiting; in severe cases, renal failure has caused human deaths. No known antivenom currently produced.

I have some time today, and I’m curious what their response will be. I’ll write to them to see whether they could, in an emergency, be able to send some antivenin here to Thailand to treat a bite by R. subminiatus or R. tigrinus.

OK, I’ve written them, let’s see if they respond…

Update 2/11/2016 – No, they did not respond at all. Nothing. Today I was thinking about the topic and decided to write more people to see if I could get some vials of Rhabdophis tigrinus antivenom from Japan to try in treating patients with complications from bites of R. subminiatus. The following is the letter I’m sending to a number of researchers, scientists, and again, to “The Japan Snake Institute.”

Greetings from Thailand! I am a snake enthusiast from the USA, living in Thailand for the past 11 years.

I have been researching the subject of Rhabdophis envenomation because I have had a few experiences here, helping young boys who were bitten.

In both cases, the victim was a young male child. One was 12 years old, and the other was only 9 years old. Both the boys had kept the snakes as pets and thought them to be harmless.

Both were admitted to hospital intensive care for 10-14 days with bleeding from various orifices and ultimately renal failure.

I have read that your antivenom may help particularly in cases of renal failure.

On two occasions I emailed staff at “The Japan Snake Institute” about possibly purchasing some antivenom to help these boys recover. Unfortunately, I never received any reply from them at all.

I am hoping you will reply favorably after reading this note!

As you know, Thailand has not made antivenom for any snake in the Rhabdophis genus. R. chrysargos and R. nigrocinctus are also found in Thailand, and they may have similarly toxic venom.

I anticipate more emergency situations involving children in the coming year(s) and I must try to help in any way I can.

I am asking you if I can purchase some of the R. tigrinus antivenom for experimental use by hospital staff when patients in Thailand are envenomated by this snake.

We are not seeking to make any profit from this venture, the antivenom will be provided to Thailand hospitals on a case-by-case basis, and at cost (no markup).

As I understand your article to read, each vial of freeze-dried R. tigrinus antivenom, Equine (lot #0001) is able to neutralize the coagulant activity of about 4 mg of R. tigrinus venom.

If we were able to purchase just 10 vials, or even 5, that could be a significant help to patients here in Thailand who need it – especially children.

Would you please respond favorably to this request?

Thank you for your time and concern about what will most certainly be in the near future – a life and death matter.

Just a pic – wanted to share this Thailand snake before I forgot….

A boy, 12 yrs old, in Phuket, Thailand was in the Bangkok hospital for 2 weeks after a bite from this snake. The venom specifically attacks the kidneys.

Once thought to be harmless – these snakes are now considered dangerous. Don’t have one as a pet… 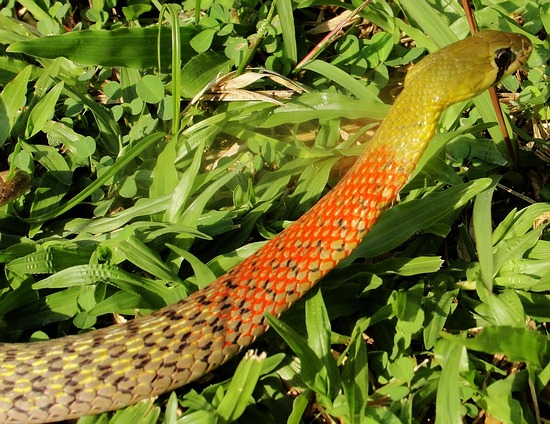 Notes: These snakes are commonly found near water, lakes, ponds, and in gardens. Recently a friend had one in his swimming pool in Krabi town, southern Thailand.

Active Time? Daylight hours. I’ve found them sleeping around 1 foot off the ground in bushes.

Food: Frogs, poisonous toads, and fish. I have not seen them eat anything but frogs and toads.

Defensive Behavior: Spread out the neck slightly to make themselves appear bigger. Not as dramatic as a cobra. Lift their head and neck off the ground 4-5 inches.

Some snakes of this species, and others in the genus Rhabdophis, have displayed a rather unique defensive behavior of exposing the back of their neck and secreting poison from their nuchal glands. This is not all that common unless very provoked.

One researcher, Kevin Messenger, claims that the R. subminiatus helleri he caught in Hong Kong actually sprayed a mist of the poison into the air from the back of the neck. Quite amazing, if true, right? Obviously more study is needed into the secret life of this fascinating snake. Other snakes in Rhabdophis genus with nuchal glands: R. nuchalis, R. tigrinus, R. nigrocinctus, and R. chrysargos (in Thailand).

Here is an image of the snake expressing poison from the nuchal glands.

Here is the description in a scientific journal about Kevin’s encounter.

Venom Toxicity: LD50 is 1.29 mg/kg for intravenous injection (source). That is about the same rating as the very deadly “Banded Krait (Bungarus fasciatus)”. It was previously thought these snakes were harmless. Some kept them as pets and were bitten. In one case the snake was left to bite for two entire minutes before removing it from a finger.

Serious complications resulted requiring hospitalization and intensive care. Click for article. These snakes are rear-fanged and need to bite and hold on, or, repeatedly bite to have any effect on humans. Once they do either – there is the possibility of severe problems including renal failure and death. Recently a small boy of 12 years old was bitten by one he was keeping as a pet in Phuket, Thailand and he is currently being treated (11/5/10). Be very careful not be be bitten by these snakes. There is NO ANTIVENIN available yet for these snakes in Thailand. Scroll down for information about antivenin manufactured in Japan that may have some positive effect.

Another study in Japan ranked the venom as having an LD50 of 1.25 mg/kg for intravenous injection. (Japan Snake Institute, Hon-machi, Yabuzuka, Nitta-gun, Gunma-ken, Japan) V.1- 1969- Volume(issue)

In Japan they make limited amounts of antivenin, but it is specifically for their in-country use.

Update: The 12 year old boy bitten by the Rhabdophis subminiatus was treated for 2 weeks of intensive care, and released. He was bitten multiple times, the 2nd bite lasting over 20 seconds.

Offspring: I had a juvenile red-necked keelback I’ve taken photos and videos of and released into the wild. I cannot find anything much about offspring. Recently (mid-June) I found a DOR juvenile very recently hatched, so like most snakes in Thailand the time around June is when they are hatching out. The coloration of the juvenile is quite different from adults as you can see in the photo and video below.

Notes: These snakes can inflict a deadly bite when they are allowed to bite for longer than a couple of seconds. I know personally of two instances where a child was bitten for well over 20 seconds, and a man was bitten for about a minute. Neither wanted to hurt the snake to remove it forcibly, and both spent over a week in intensive care, with the possibility of renal failure and death. Do not play with these snakes. If you have one, do not free-handle it. Treat it like you would a pit viper or a cobra. The LD50 on this snake for intravenous was stated to be 1.29 mg/kg. That is VERY venomous.

As a precaution, any snake in the Rhabdophis genus should be treated with extreme caution. In Thailand we also have the diurnal Rhabdophis nigrocinctus, and Rhabdophis chrysargos, both of which may be able to inflict a medically significant bite if given the opportunity.