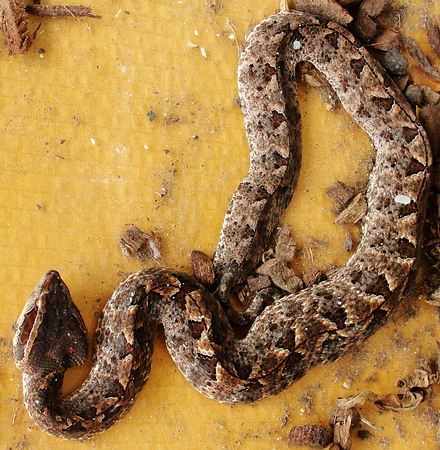 Length: Usually less than 1 meter. Female Malayan Pit Vipers are the larger and fatter snakes. Males of the species don’t make it to 1 meter long. I have only seen two in 12 years that were close to 1 meter long.

Notes: These vipers are similar to North American “copperhead” snakes. They prefer dry, flat areas. They are known as lazy snakes. They may not move out of the way at all if someone is walking right toward them. After they bite they are known to remain in the same location. There are thousands of bites per year in Malaysia and Thailand from this snake.

These snakes are so dangerous when handled because they are not consistent with their behavior. One day they will be calm. The next, or the next 10 minutes – they will violently strike out lightening fast. Their preferred habitat is under dry leaves, wood, or rocks. They are active during the night mostly, especially during rain.

Nickname: Finger rotters – given by Al Coritz, Viperkeeper on YouTube. If they get you in the finger – you’ll likely lose part of your finger, hand, or arm without immediate care.

Active Time? Day if cloudy and/or rainy, and night.

Defensive Behavior: Partially coiled with neck in an “S”. Their strike is very fast. Their fangs are long – and in the front of the mouth. Some strikes are short, others involve the whole body as it “jumps” at the same time it strikes. Don’t underestimate the distance this snake can reach when striking. Also, this snake is VERY good at striking behind its head. Watch the video.

This pit viper has the longest fangs of any other snake in Thailand – including the Siamese Viper (D. siamensis).

Venom Toxicity: Very toxic. Venom is necrotoxic – it destroys all cells it comes in contact with – red blood cells, muscle, and ligaments. With a quick hospital visit after a bite you may just lose part of your finger or some tissue where the bite occurred. The venom causes a bite victim to bleed from body orifices – eyes, nose, mouth, ears, sexual organs, and sometimes fatally in the brain. Most people don’t die if they go to the hospital. Deaths occur when bite victims delay seeking medical treatment. There is an antivenom for this snake.

If you are bitten by this snake, do NOT wrap a tight band around the bite location. That will stop the venom from moving, from being diluted, and the tissue will suffer much more destruction.

Offspring: Lay eggs. Female guards them. Young are about 9 inches long and fast and thin. They are fully able to bite, and have full strength venom.

We also put out a FREE ebook you can get today.