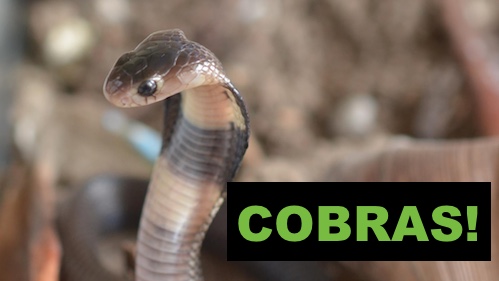 The monocled cobra is one of Thailand’s most deadly snakes – with highly toxic (neurotoxic + cytotoxic) venom. One bite on your toe from one that jumps out from under your outdoor refrigerator can kill you. I heard the story direct from a woman which had this happen to her husband. Monocled Cobras are nearly everywhere across Thailand. I had a friend that found them in his kitchen often. I’ve seen them crossing the road (see video below), and there was a family of these cobras living under the office of my wife’s workplace – with many 18″ baby cobras.

I just heard about Grant Thompson, an 18-year-old man in Austin, Texas who was bitten on the wrist by a monocled cobra and died of cardiac arrest. Authorities are looking for the snake. Tips that might catch the snake 1. If cool in the mornings, the snake might be found in bushes sunning itself. These cobras prefer hot weather over 80°F. 2. They are most active during the daytime, but can move at night. 3. N kaouthia will eat eggs, mice, rats, if no other snakes are to be found. They prefer snakes, but I don’t know what Grant fed his snake. It might be unable to stalk prey and feed itself and die within a month.

Thais respect (fear) this snake because many have friends or relatives that have been envenomated (bitten and venom injected) by this snake. They even make Buddhist amulets with cobra snake images.

I’ve worked with two hatchling monocled cobras, and even at 12-15 inches – they are fierce. One snake handler described monocled cobras as “spastic” – and I have to agree.

If you are bitten by any cobra – get to the hospital as fast as you can. Monocled cobra venom is on par or even more toxic than some of the Thailand kraits, and much more toxic than King Cobra venom when compared drop to drop. Even if the bite is a small one, a nick, or a scrape, get to the hospital immediately. All it takes is a drop of venom to hit your bloodstream for biological chaos to ensue.

Appearance: Monocled cobras are easily identified by looking at the back of the hood – there is a monocle – or eye type shape there. They are light brown to dark grey to solid black. Most are very close to black.

Length: Typical maximum length of about 1.5 meters. Recently I saw one in a mangrove forest that was 2 meters long, a giant. They can get up to 2.2 meters – about 7.5 feet long.

Range: All over Thailand and most of Southeast Asia.

Notes: Neurotoxic venom affecting nerves, brain, and causing death very quickly without treatment. They are very fast strikers. The baby monocled cobras are every bit as deadly. Please be CAREFUL!

Recently a friend and I found a 1.5 meter long N. kaouthia on a dirt road near where we were herping. It was nearly paralyzed but gaped its mouth when touched on the head with a snake hook. The body didn’t move. We think it was just bitten by either a krait, or a King Cobra – both of which prey on this species. There was one visible bite mark on the side of the body and nothing else. I’m guessing King Cobra.

Habitat: Both flat and hilly regions. I’ve seen them on hills, but usually, near people – under houses and in places rats and frogs are likely to be found. I’ve seen them most often in residential areas bordering forest, or near the ocean. In the mornings they can be in trees and bushes – trying to get some sun to warm up. They love to hide under leaves, wood, anything really. The lifespan is around 30 years.

Active Time? The snake is mainly diurnal – active by day, but I have seen a number of them still active at night. In fact, in Thailand – I’ve seen about a dozen active at night – the rest were active during the daytime.

Monocled cobras are very active and ready to strike especially as the temperature climbs past 35°C (about 95°F). Do be very careful with them during this temperature range because they are very easily agitated and strike much more often.

Offspring: Lays 25-40 eggs. Young are fully prepared to envenomate as they hatch. Mating takes place after the rainy season. Eggs incubate in about 2 months. The eggs hatch between April-June. Hatchlings are between 8 to 12 inches at birth.

Here’s a video I did about finding a bunch of juvenile cobras at a friend’s house not far from mine. He lives closer to the beach and cobras like that a lot. He says he say about 3 of them, but I find over 50 in his place. He has found snakes before, but nothing like this.

Cobra Snakes in a House – Video

One friend I have said, out of all the snakes in Thailand (about 200) – he likes the monocled cobras the best.

He has yet to be bitten by the monocled cobra, but he works with snakes everyday and he’s right – these snakes were born to kill. It doesn’t matter if it’s a 12 inch juvenile Naja kaouthia – like this one in the photo is – they are ready to kill you if you make one mistake.

I’ve kept the smaller monocled cobras for a short time – two weeks at most. I find that I have to watch them very, very closely. Every second I’m working with them – my eyes are on them and aware of what they are doing and what they could do. I don’t take any chances with these snakes. I have seen first-hand the damage their venom does. It is not pretty stuff.

He asked me too – what is your favorite snake?

I do like the King Cobra – and that’s what I answered, since I couldn’t think fast enough. Even now – if you ask me – I’m not sure. The Malayan kraits are very interesting snakes… as are the monocled cobras, and the king cobras. I definitely like Ridley’s Racer as well – the one that lives in caves and catches bats in mid-air. That’s a cool snake. Some of the big rat snakes are very cool – a lot of energy and wicked fast.

All in all – you know, it might just be the king cobra!

What is your favorite snake? Have you caught one before? Seen one before?